On a recent visit to Final Touch Jewelry in New York city, an Black woman was falsely accused of stealing and asked to empty her bags.

Veleda Spellman the woman in question, recorded herself emptying her bags to prove her innocence, as well as call out possible racial bias and profiling.

She later posted the video to her TikTok page, which quickly went viral with over 25 thousand views.

Being accused of stealing because you are black is heart Wrenching! #shoppingwhileblack

Spellman made no attempt to hide her belief this was a blatant example of racial profiling in her video caption.

“Being accused of stealing because you are black is heart Wrenching!”

After first speaking directly to her camera to make it clear she has not taken one thing, Spellman hands her camera to a fellow customer, who goes on to document Spellman complying with the cashier’s wishes.

Spellman eventually empties the contents of her bags, as well as her pocket book, onto the floor, revealing nothing from the store.

She goes on to declare the cashier humiliated her, and invites him to call the police, as he threatened to do.

Spellman, identifies herself in the video as the CEO of Positive Queens, a coaching and mentorship community which aims to empower women to be the beacon of change in their communities.

She goes on to say she was shopping at Final Touch Jewelry to buy contents for gift bags and it was not the first time she had shopped there.

It will, however, likely be her last, as after definitively proving their was no stolen merchandise in her bags, Spellman declared:

“I’m not spending a dime in this store. I’m very upset and I’m also humiliated.”

After re-filling her bags, Spellman drives home her accusations of racial profiling, chanting:

In a subsequent interview with The Daily Dot Spellman went on to say she believes the cashier was determined to accuse and humiliate her the minute she stepped foot in Final Touch Jewelry.

“There were other people of other nationalities in his store, I was targeted just about the moment I walked in the door.”

Spellman’s ordeal and video is a sobering reminder of a recent racial bias in retail study done by cosmetic giant Sephora.

According to the study:

“Black retail shoppers are 2.5x more likely than white shoppers to receive unfair treatment based on their skin color.”

Spellman’s over 100 thousand TikTok followers came out in droves to support her and condemn the actions of Final Touch Jewelry. 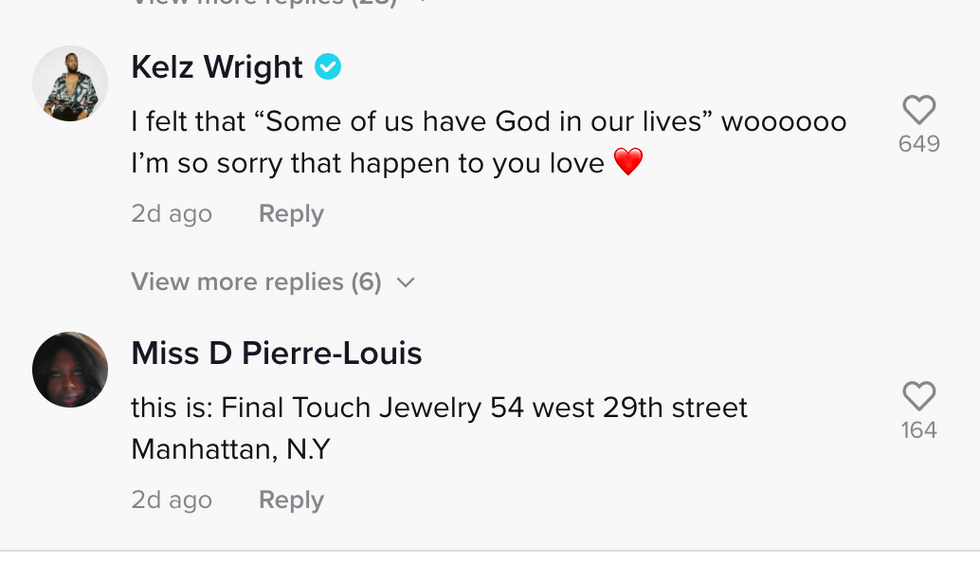 Perhaps the most touching shout-out on TikTok came from the young woman whom Spellman asked to help her record the video.

Spellman went on to thank the young woman again for helping her in exposing the cashier.

The Daily Dot reached out to Final Touch Jewelry for comment, but were told there was “no one available” to give a comment on the incident or Spellman’s video.