There was only one show in town in London this weekend, and that was the Queue. But the catwalks of London fashion week soldiered on.

“It felt important to keep going, because this is a time when London needs to stick together, and right now some of this city’s young designers are at risk of losing their businesses,” said the designer Jonathan Anderson after his JW Anderson show.

A black T-shirt printed with the words “Her Majesty The Queen 1926-2022” was included alongside a minidress constructed from plastic computer keys jumbled into an alphabet mosaic, and a pair of plastic shark fins worn by the model and author Emily Ratajkowski.

The catwalk began on a Soho street, crash barriers holding back the crowds who have filled central London all weekend, before snaking through a video gaming arcade.

Backstage after the show, Anderson cheerfully defended the incongruous combination of looks.

“London has felt absolutely extraordinary, over the past week. I’ve never known an energy like it. I don’t think I’ve ever seen Soho this busy, and it is not all sombre. People are having a drink but they are just being really nice, you know? It’s very British.”

The late addition of the T-shirt – with a font copied from the Transport for London homage posters which appeared on bus stops all over the capital on the evening of the Queen’s death – “will remind me what this moment in time was really about, when I look at pictures of this collection in 20 years time”, he added.

The dilemma of whether to risk looking trite by slotting a tribute to the Queen in amid the party dresses, or appearing disrespectful by not doing so has divided London fashion week.

As it happened, Steven Stokey-Daley’s show was about privilege, gender and dysfunction in the British upper classes, but it was nothing to do with the Queen. In the grand Victoriana of the St Pancras hotel, actors read excerpts from love letters between Vita Sackville-West and Violet Trefusis.

The 100-year-old words of two women navigating their way through patriarchal society accompanied clothes that were gender fluid in the style of a 1930s queer gardener tending to Sissinghurst – a calico shirt, wide-legged corduroy trousers, a merino sweater.

The mood at Sunday’s shows was low-key. Trays of champagne are out; designer Nensi Dojaka gave each guest a sprig of white hydrangea instead. But the celebrity front row made an appearance at Rejina Pyo’s show, where the actor Sharon Horgan and singer Jessie Ware showed up to support the young designer.

On the 28th floor of a new City of London skyscraper, Pyo said she had been thinking about Tolstoy’s dictum that “one can live magnificently in this world if one knows how to work and how to love” – and how, when Tolstoy wrote those words, he was thinking only of men.

Pyo, whose fresh tailoring and light-touch prettiness has made her an influential force in fashion, wanted to celebrate what a life fusing work and love looks like to women, she said. A soft trouser suit, and stretchy lace dresses worn with low sandals, came in lemon, sage, duck egg blue – and, just occasionally, in black.

Michael Halpern’s show began in silence, with a model in a coronation-length pale blue cloak and with a silk headscarf knotted beneath her chin.

American-born, the designer is shortly to become a British citizen, and wanted “a quiet moment to say thank you to a country which has given me a career, friendships, a whole life”, he said.

Once the dress made its catwalk exit, David Bowie’s Cat People began to be played, and a strapless leopard print gown changed the mood. 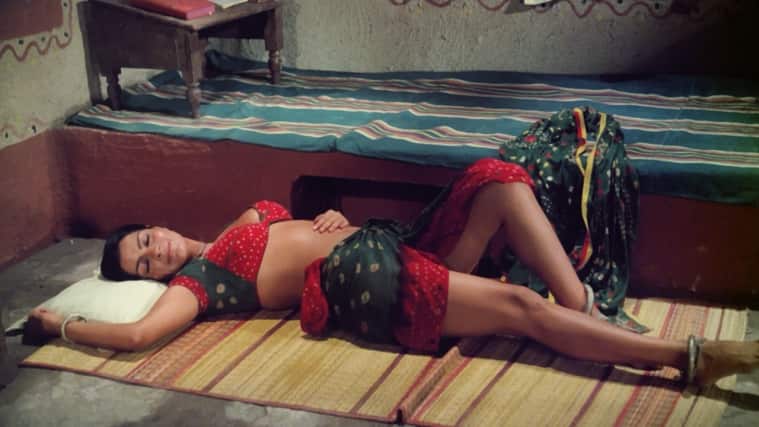